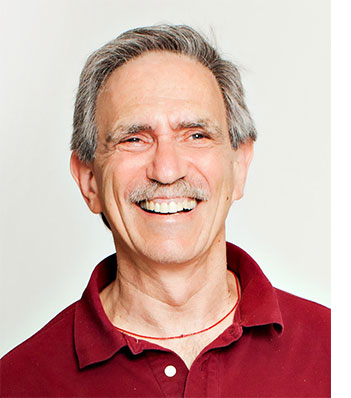 James Baraz has taught mindfulness meditation since 1978 and is co-founder of the world-renowned Spirit Rock Meditation Center in Woodacre, California. He is co-author of two books Awakening Joy: 10 Steps to a Happier Life and Awakening Joy for Kids. James has taught the Awakening Joy course to over 24,000 people from 30 countries since 2003, as well as retreats and workshops in the US and internationally.

"I believe every person wants to be happy. At the core, all of our actions are motivated by a longing for genuine well-being. Our own well-being and joy have the capacity to awaken those qualities in others around us, becoming a gift to everyone we meet." -- James Baraz

In 2003, I started the Awakening Joy course so that the Buddhist teachings that I’ve so benefited from could be made accessible to and practiced by anyone whether or not they were interested in Buddhist philosophy. My approach has been to present these principles and practices with a particular emphasis on how they can lead to true happiness. I’m grateful that the course has become more popular than I ever could have imagined, with thousands of people from all over the world practicing the principles it offers.
I lead Awakening Joy workshops, often with my wife, Jane, at Spirit Rock, Esalen Institute and other venues in the United States and abroad. In 2010, with Shoshana Alexander as co-author, I wrote Awakening Joy, a book based on the course.

I would say that a central theme in my life has always been to find and experience true happiness and then share it with others. As an elementary school teacher for twelve years it was rewarding not only to help students learn the curriculum but, even more, to help them see their own goodness. Although teaching can be a very demanding job, I found that when I was able to be present for the students and encourage them to bring out the best in each other, it was a tremendously fulfilling experience. I'm happy to say that many decades later, since the arrival of Facebook, I'm still in touch with students who’ve contacted me with the query, “Could you be the Mr. Baraz who was my 6th grade teacher in Astoria, Queens?”In 1974, I discovered mindfulness meditation and Buddhist philosophy. This was a turning point in my life. Because I was acutely aware of how my mind was so filled with confusion, insecurity and self-judgment, I started practicing in earnest as a way to find an inner peace that I longed for. It was clear early on that there was something to this meditation stuff. I was becoming more at ease and actually feeling good about life. I’d found something that was miraculously leading me toward more genuine well-being and happiness.As I deepened my practice, I had a natural urge to share what I was discovering with others. I didn’t know how that would happen, but shortly after I moved to San Francisco in 1977, I was invited to teach a meditatio class at Holistic Life University. With the support of my teachers, Joseph Goldstein and Ram Dass, I began leading weekend retreats as well as starting one of the first insight meditation groups in the Bay Area. I also began to organize longer intensive meditation retreats for Joseph and Jack Kornfield, so that others could experience the same benefits I received from intensive meditation practice. With the encouragement of my teachers, I started teaching longer retreats myself in 1982 and have been doing that ever since.In 1980, I met the love of my life, Jane, who has a similar dedication to conscious living. Our marriage has been based on our commitment to help each other grow and shine. Towards that end, I’ve been blessed with the perfect partner.As interest in meditation grew in the 80s, I was part of a group that founded Spirit Rock Meditation Center in Woodacre, California, which has become one of the most respected mindfulness meditation centers, supporting thousands of practitioners since 1986. At Spirit Rock, besides serving on the Board of Directors and the Governing Teachers Council, I’ve been involved in a number of programs to support others in their practice.Jane and I started Spirit Rock’s thriving Family Program in the early 90’s. In 1997, I created the Community Dharma Leader (CDL) program, leading the first three 2 1/2-year trainings (the last of those with Tara Brach as co-leader). Those programs trained over 200 senior students to teach meditation in their communities throughout the United States, Canada, Mexico, and Europe. After those first three trainings, other teachers from our community have subsequently trained hundreds more leaders in communities around the US and internationally.

I also started a network of meditation support groups (Kalyana Mitta Network) throughout the United States that have been a strong support since 1995 to many people in their meditation practice.In addition to teaching at Spirit Rock, I've taught mindfulness meditation at Esalen Institute since 1983 and have led retreats and workshops throughout North America and internationally.Besides focusing on being present for all the joys in life, I also feel it’s essential to deal skillfully with life’s challenges and sorrows. In the fall of 2013, I co-led a new two-year program exploring how we can become more conscious in working with aging, illness, and dying, (known in Buddhism as the Heavenly Messengers) to support personal exploration as well as service to others as they face these unavoidable facts of life.I have two sons and three grandchildren, and live with Jane in Berkeley, California, where I also lead a meditation community, the Insight Meditation Community of Berkeley (IMCB). All in all, since I was first motivated to find happiness and share it with others, it’s been quite a journey. As my mother, Selma Baraz famously says, my life is truly blessed.

Ever since I discovered the power of mindfulness practices and principles in my own life, my vision has been to share them with others, not only for their own personal benefit, but as a way to bring more consciousness to humanity and our planet. As a friend says, “We’re in a race between fear and consciousness.” I believe that consciousness is stronger than fear and it is a joyful responsibility to awaken consciousness as much as we can in the world at this time. I invite you to see the Awakening Joy course in that context.

James Baraz, cofounder of Spirit Rock Meditation Center and renowned meditation teacher for more than 35 years, reveals his 10-step program, based on the curriculum of his popular “Awakening Joy” course, for how we can reorient our minds away from dissatisfaction and distraction  toward the contentment and delight that is abundantly available in our everyday lives.

“Opening to joy takes courage and intention. This book will inspire you to discover genuine happiness, and show you how. Drawing on perennial wisdom and accessible meditative practices, James and Shoshana offer teachings that can awaken your love of life.”

“Every page of this wonderful book has something that inspires faith or confidence: a new story, a memorable quote, an exercise that invites participation....From beginning to end, it is a joy to read. ”

Sylvia Boorstein, author of "Happiness Is An Inside Job: Practicing for a Joyful Life"

“This book should be read by every person who cares about making this a better world. ”

Daniel Ellsberg, author of Secrets: A Memoir of Vietnam and the Pentagon Papers

“Well-written, informative, and a significant contribution to everyone’s well-being. ”

Angeles Arrien, Ph.D., cultural anthropologist, and author of award-winning "Second Half of Life: Opening to the Eight Gates of Wisdom"

“In our pursuit of happiness, this moving book should be a dog eared, worn out companion....As you work through this elegant material, you will find yourself laughing a little longer, dancing a little more, and awakening to the beauty of what lies inside you and in those nearby.”

Dacher Keltner, Professor of Psychology, UC Berkeley, and author of "Born To Be Good: The Science of a Meaningful Life"

“I have been deeply touched and inspired by James Baraz’s accessible, practical wisdom.”

“This is a life-changing book that not only teaches practical, useful strategies for increasing your awareness, but also illuminates choices about how you can lead your emotional life.”

“To awaken joy in oneself and others is one of life’s great skills, a skill taught by sages across the centuries, and now distilled in this book.”

“Awakening Joy: 10 Steps to Happiness is an important guide to transforming our everyday experience into genuine happiness.”

Sharon Salzberg, author of "Lovingkindness: The Revolutionary Art of Happiness"

“In this beautiful and heartwarming book, James Baraz and Shoshana Alexander take us on a journey that truly awakens joy. There are stories that bring tears to our eyes and practices that transform our lives. This is a loving, wise, and compassionate testament to what is possible for each one of us. Highly recommended.”

Joseph Goldstein, author of "Mindfulness: A Practical Guide to Awakening"